Ios is one of the most beautiful Cycladic and Aegean islands. Named after the Ionians who settled on the island at the end of the 2nd millennium B.C., Ios has a coastline of 87 kilometers. The island of Nios, as locals like to call it, has a long history, just like the other Aegean islands. Ios is known for its nightlife, its picturesque alleys and of course its beautiful sights.

Below, you will read a bit about the island of Ios, as presented by Ios The Project.

The island is 111 miles away from the central port of Piraeus. There are several solutions to reach the island of Ios. First and foremost, you can reach the island of Ios by boat from the port of Piraeus or from Rafina. The journey lasts between 3-4 hours and 11-12, depending on the type of boat. Ios ferries’ itinerary varies depending on the season. During the summer months, Ios-Piraeus routes are definitely more frequent.
Ios unfortunately doesn’t have an airport. But that doesn’t mean that you cannot travel by plane to the nearby islands of Santorini or Mikonos and then finish your journey by boat. Flights are often daily and coastal connections between the islands are very frequent as well. Make sure that you know beforehand the boat schedules. Finally, you can also go to Heraklion, Crete and from there go to Ios, as there is a boat connection between the two islands. 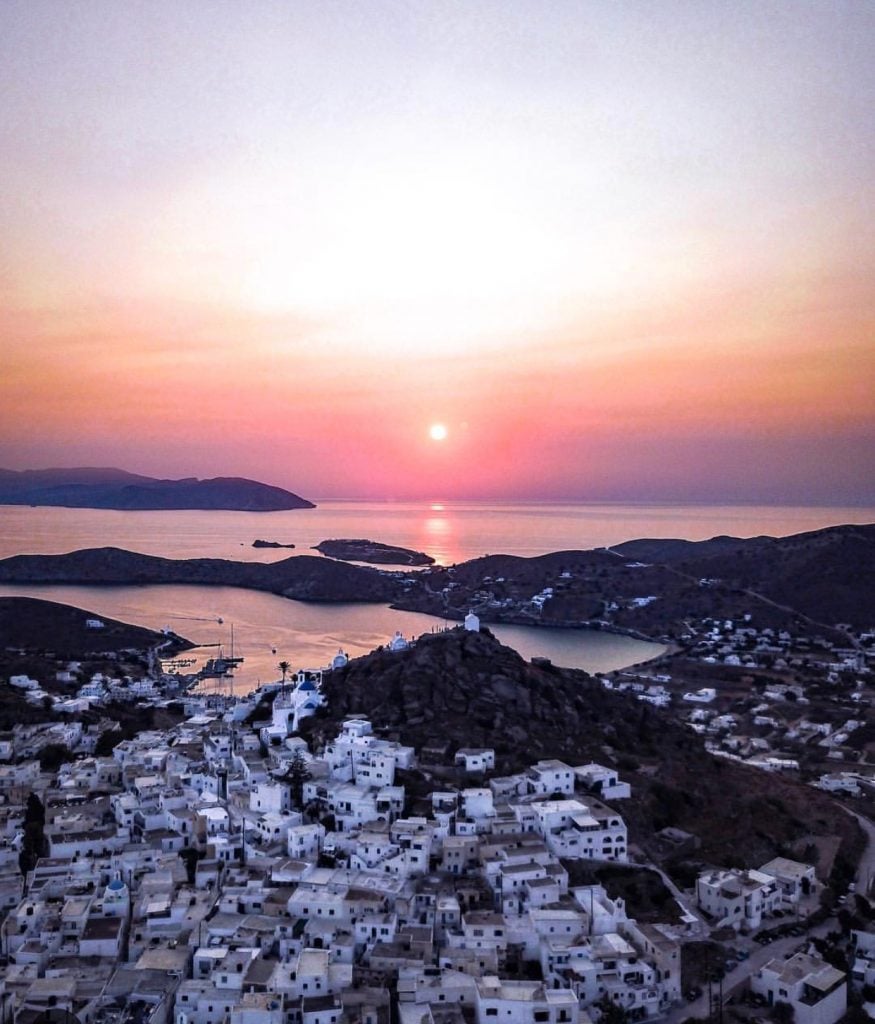 The Weather in Ios

Ios, just like the rest of the Aegean islands, has Mediterranean climate. In a few words, the main features of the Mediterranean climate are winter rainfalls, summer droughts, mild to warm summers and cold winters. An important element of the Aegean islands’ climate is the sea, which shapes humidity levels and affects the gaseous masses. Spring and autumn weather is unstable, with large variations from year to year. During winter and summer months, things are more stable, with cold and drought prevailing respectively.
The uncertainty of the wind is of utmost importance when checking the weather forecast. The Aegean winds, which appear around the end of May and last until about the end of October, are north-facing and of high intensity and duration during July and August. The strong winds, which blow in the Cyclades and more specifically in Ios, cause problems in the ferry connections. Prohibition is a common occurrence, but residents of the Aegean islands claim that the wind blowing on their islands is something they wouldn’t change.

The island has a large Archaeological Museum housed in the Amiradakio Mansion. In the museum, you can learn about the island's natural environment and archaeological history, with exhibits mainly from the Middle and Late Bronze Age. At the same time, the museum of Ios has collections of traditional pieces from the modern history of the island, exhibits that are equally important for the Cycladic culture as a whole. Many of the museum's exhibits come from the Archaeological Site of Skarkos. The Prehistoric settlement of Skarkos is one of the most important Cycladic settlements, as it shows the structure and organization of the Cyclades in ancient times. The archaeological site is located on one of the largest arable areas in Ios, Lower Kambos. The dry stones that surround the site will introduce you in the best possible way to the atmosphere of the circular, stone-built settlement of Skarkos.
Homer’s tomb shows the island’s important position during ancient times. Homer, the greatest epic poet of all times, died and was then buried in the area of ​​Plakoto. Mythology reports that he died in Ios, unable to solve the Plakoto’s fishermen’s riddle.
Ios’ Mills and the Odysseus Elytis Theater are equally important sights. The windmills are located in the part of the island where the Aegean winds reach high tension and speed. Their Cycladic architecture is one of a kind. The theater is open, designed by architect Peter Haupt. It hosts major cultural events and theatrical performances, which enhance the island's cultural identity. 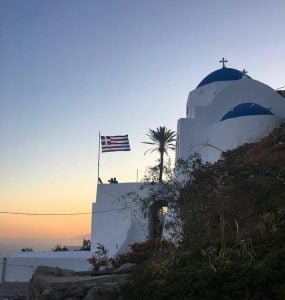 
Ios’ churches are considered historical monuments, mainly of the late Byzantine years. Panagia Gremiotissa is the most well-known church – in Ios and in the Cyclades, and the most impressive one, too. It is located in the Chora of Ios. The most well-known churches are also located in the Chora or port of Ios, but that doesn’t mean that there are no small or larger churches in Kalamos, Psathi or Paleokastro. According to a local tradition, there are 365 churches on the island, each one dedicated to a day of the year.

Settlements and areas of Ios

All of the island’s settlements are easily accessible. Unlike other islands, distances between them are relatively short. The most famous areas of the island are:

Ios’ main settlement is Chora. Ios’ Chora is just 2 km. away from Ios’ main port. One can easily cover that distance by bus or on foot, from a beautiful paved path. It seems hanged from the hillside and is a characteristic sample of the Cycladic architecture, with small, white, picturesque houses and alleys that end up in Panagia Gremiotissa, where the view is absolutely stunning. The main square, with cafes and evening shops, is also in the Chora. There, one can find tourist shops, hotels, restaurants and rooms for rent. Ancient Greek elements are memorably combined with modern, traditional architecture. Chora is the heart of Ios for locals and visitors. 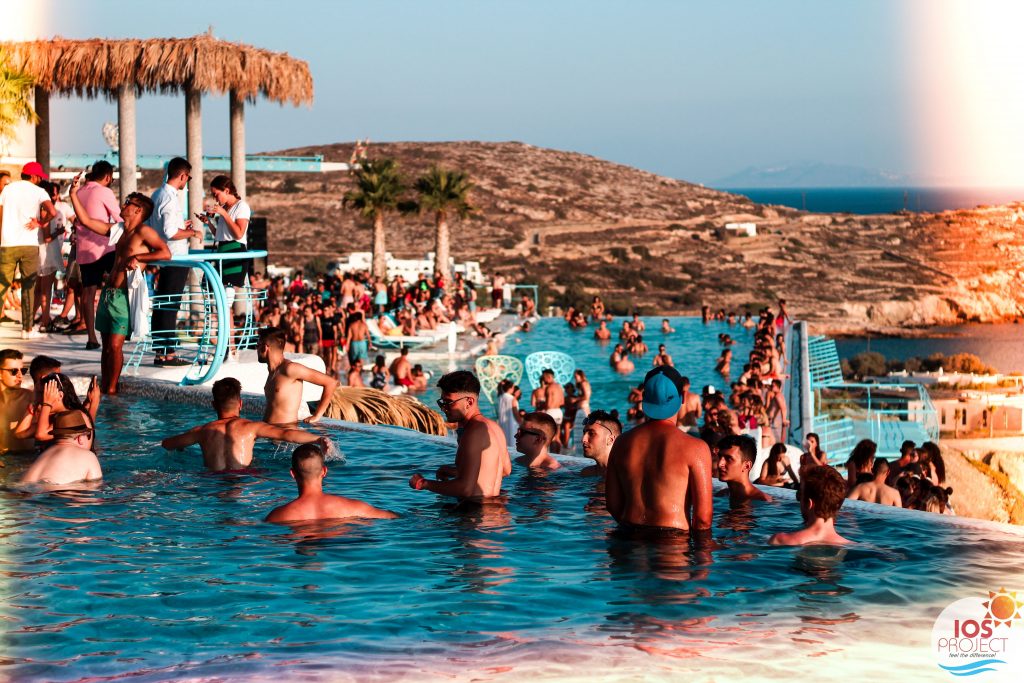 Are you wondering if Ios has beautiful beaches with turquoise water? Of course, it does! Ios has to offer a great selection of beaches. 32 kms of Ios’ coastline are beaches, some organized, with sandy and turquoise water, others rocky or secluded, ideal for snorkeling. The most famous beaches in Ios are Mylopotas, Manganari, Kalamos and the smaller and more isolated beaches of Pappas and Plaka. The beaches of Valma and Kolitsani are close to the Chora. The beaches of Agia Theodotis and Psathi are the most secluded ones, ideal for relaxation. The island’s beaches are filled with visitors looking for water extreme sports, perfect for adrenaline rush seekers. Other worth visiting beaches are those of Klima, Pikri Nero, Neraki, Diamoudia, Plakotos, Petalidi, Sapounochoma and Kabaki. If you are planning on staying on the island for several days, you can go for a mini cruise around the island and see many Ios’ beaches from your boat.

Nightlife and entertainment in Ios

Ios is the number one destination for young people who want to enjoy a vibrant nightlife during their summer holidays. It seems as if the party never ends and visitors as well as residents share a good mood. You can start having fun early, on the island’s beach bars. Then, you can party until the early morning hours at the bars and the scattered clubs of Chora. Visitors from around the globe dance side by side, drink, have fun and enjoy the beauty of the island. As the time passes, music gets louder, with both foreign and Greek song selections. Ios is characterized by its vibrant nightlife as "the island for those who are and those who feel young". The island is full of popular bars and clubs, well-known throughout Greece.

Ios, which is a very popular - among tourists - Aegean island, has a great selection of hotels. Ios, apart from the hotels, has rooms for rent, apartments, villas and modern residences. The available hotels of Ios are located in different areas of the island. You can choose to stay in Mylopotas or Chora, by the sea or the port. Hotel catalogues can help you compare the prices, depending on the season, and choose the hotel that best suits your needs. Find the best hotel in Ios pack your bags to enjoy a unique stay on the island of Ios. Choose from a large selection of accommodation options for the island of Ios.

Find out more or adjust your settings.